State of Decay: Part One   By Peggy Martinez 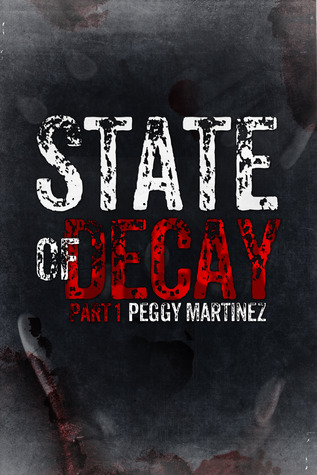 Despite what you’ve been told, the Apocalypse doesn’t begin with fire raining down from the heavens, nor does it begin with the human race falling down on their faces in supplication before a triumphant god. No, the sounds of the Apocalypse are much more terrifying than that, and I should know … I’ve heard them, and hearing the world tumble into chaos around me is not something I’ll ever forget.
My name is Melody Carter.
A Boeing 767 fell from the sky and wiped out most of my neighborhood.
But, that’s the least of my worries.
My list of “Things I’m Most Worried About” shifted dramatically when my dad told me that charred corpses tried to make a meal out of their rescuers … I’m thinking yours would too.
This is the beginning of my story.
It’s not for the faint of heart.

As a sixteen-year-old, Tessa Cartwright was found in a Texas field, barely alive amid a scattering of bones, with only fragments of memory as to how she got there. Ever since, the press has pursued her as the lone surviving “Black-Eyed Susan,” the nickname given to the murder victims because of the yellow carpet of wildflowers that flourished above their shared grave. Tessa’s testimony about those tragic hours put a man on death row.

Now, almost two decades later, Tessa is an artist and single mother. In the desolate cold of February, she is shocked to discover a freshly planted patch of black-eyed susans—a summertime bloom—just outside her bedroom window. Terrified at the implications—that she sent the wrong man to prison and the real killer remains at large—Tessa turns to the lawyers working to exonerate the man awaiting execution. But the flowers alone are not proof enough, and the forensic investigation of the still-unidentified bones is progressing too slowly. An innocent life hangs in the balance. The legal team appeals to Tessa to undergo hypnosis to retrieve lost memories—and to share the drawings she produced as part of an experimental therapy shortly after her rescue.

What they don’t know is that Tessa and the scared, fragile girl she was have built a  fortress of secrets. As the clock ticks toward the execution, Tessa fears for her sanity, but even more for the safety of her teenaged daughter. Is a serial killer still roaming free, taunting Tessa with a trail of clues? She has no choice but to confront old ghosts and lingering nightmares to finally discover what really happened that night